Texas Wedding Ministers offers a variety of Rituals and am open to any new rituals you may want to include in your unique ceremony. Rituals are a great way to visually represent your love as well as involve love ones in your ceremony. Listed below are a few of the rituals we have performed. Each Ritual can be added to a couple’s ceremony for $25/ritual.

2. Sand Ceremony- The sand is used to symbolize the uniting of the bride and groom. Their separate lives are symbolized by two vials of sand (usually different colors). After the exchange of rings, the officiant explains the meaning of the Unity Ceremony. The Bride and Groom then come together, and pour into one vial, the two individual vials of sand. Their flowing together symbolizes the joining of the couple as they share their first experience of unity as husband and wife. The newly formed union is represented by the intertwined pattern of sand created by the couple. This is also a great ritual to involve children if couple is blending a family.

3. Unity Cross– The Unity Cross is a multi-piece Sculpture assembled by the Bride and Groom during the Wedding Ceremony, completing the sculpture – showing the “Two Becoming One”. It is a lasting example of your Wedding Covenant that you can display in your home. General Genesis Chapter 1 is used to describe this ritual as Man as the protector the outer cross and women was taken by man in beauty the inner cross.

4. Hand Holding– A meaningful read where the Bride and Groom are asked individually to take their partners hands (palms up) and have descriptive reading of each on how their hands will guide them and aide them through marriage.

5. Hand Fastening– Can be done many ways whether it be the binding of cords or simple single cord “tying the knot” around the couples hands uniting them together. 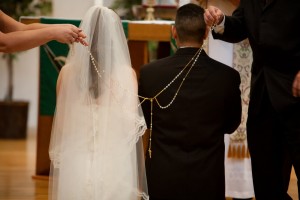 6. Lasso– (sometimes called, “lazo”) or rope is placed around the bride and groom’s shoulders (groom’s shoulder’s first) in the form of an “8” (the infinity symbol) – after they have exchanged their vows – to symbolize their everlasting union. This is usually done by the officiant, however, family members can also take part in this ritual. This is very popular in the Spanish Catholic Ceremonies.

7. Arras Coins– Symbolize that the Groom recognizes his responsibility as a provider, and pledges his ability to support and care for her. Acceptance by the bride means taking that trust and confidence unconditionally with total dedication and prudence. The number 13 represents Christ and his 12 apostles. Another popular belief is that the thirteen coins represent the 12 lunar cycles of a year, and the thirteenth coin symbolizes the couple’s honeymoon. The coins are given to the Groom who then pours the coins into the Brides hands while repeating promises and then the Bride returns the gesture. This is very popular in the Spanish Catholic Ceremonies. 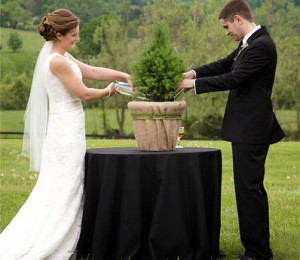 8. Unity Tree Planting Ceremony– Just like the unity candle and unity sand ceremony. The unity tree planting ceremony can be used to symbolize the joining together of two individuals or the joining of two families.
The ceremony is conducted in much the same way as other unity ceremonies are. You set up a separate table near the alter.On this table you would have a potted tree/sapling, something perhaps with special meaning to the couple or taken from a special place.You would also have two small buckets of dirt, two gardening trowels as well as a small watering can placed on the table.If you choose to have the ceremony symbolize the joining together of both family’s then upon the entrance of the mothers, each mother goes to the table and scoops in a small amount of dirt. Then they take their seats. During a specific reading or song, the couple will each add the remainder of dirt and water the plant together. After the ceremony, the couple plants the tree in at their home or a special location to symbolize the putting down of roots, longevity and strengths in their marriage. 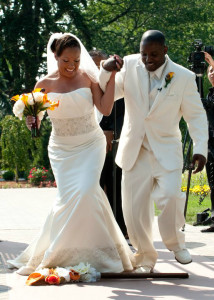 9. Jumping of the Broom– Is a symbol of sweeping away the old and welcoming the new, or a symbol of new beginnings and the sweeping away all negative energy, making way for all things that are good to come into your lives. A popular African American ritual where the couple brings a decorated broom which the Groom sweeps the area around them sweeping away the past then places it in front of himself and the bride to jump over crossing over to the new life they are beginning. The audience is asked to count to 3 then the couple jumps over the broom. 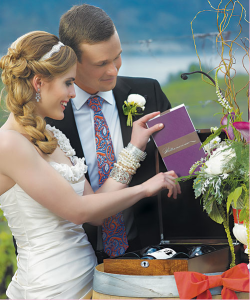 10. Ring Warming– Is such a special way to involve all of your guests in your ceremony. A ring warming is when you give your loved ones the opportunity to hold your wedding bands and make
a wish, bless or pray for your marriage. The rings are passed along to your guests at the beginning of the ceremony in most cases this only done to the 1st two row of only very close family members and friends. Once the rings reach the starting point again they are give tot he officiant to bless and then use for the ring exchanges filled with the love from the couples family and friends.

11. Love Letter Ceremony- A love letter exchange is a romantic ceremony that will serve as a lasting reminder of the commitments made to one another. Heartfelt letters, encapsulating your thoughts and feelings are locked away in a wine box to be revealed several years into your marriage.

12. Rose Ceremony– The Rose Ceremony is simple yet moving. The bride and groom exchange two roses, symbolizing the giving and receiving of their love for each other throughout their entire married life. The Rose Ceremony also conveys how to use the rose and its symbolism in difficult times in order to forgive each other. Many times the Mother’s of the couple are asked to give the roses.

These are just a few of our more popular rituals we can do ANY type of ritual the couple desires!